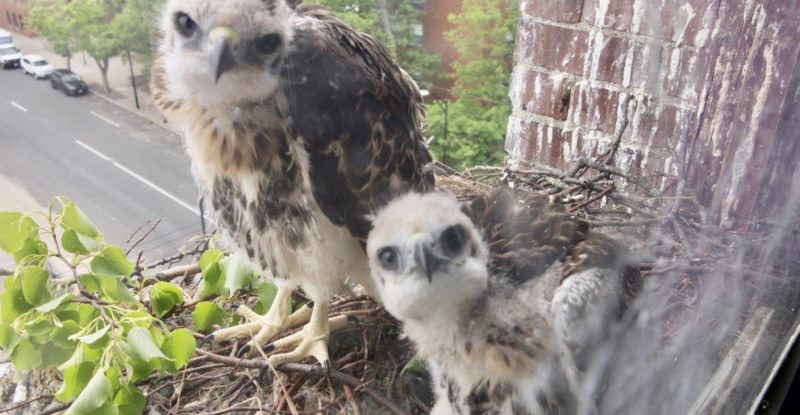 LAWRENCE — Greg Chastain looked out the fifth-floor window and into the eyes of two baby hawks nesting on an air conditioner. They tilted their fluffy heads.

A month later, anyone below and peering up from Union Street might have seen the same hawks hopping and flapping their wings like crazy, getting ready for their do-or-die maiden flights.

From mid-March to mid-June the red-tailed hawks went from speckled eggs to downy chicks to serious birds of prey perched 50 feet high on the Everett Mills.

Chastain, founder of Voices of Hope, a musical theater group that raises money for cancer research, photographed the hawks, tracking their rapid transformation.

He shared images online with Voices of Hope’s 200 members, many of whom were sheltering in place and eager for updates on the chicks’ progress.

The group named the chicks Charity and Virtue — and their brassy mom, Reno — after characters in “Anything Goes,” the show they were producing until COVID-19 shut it down.

They welcomed the close-up images: Reno feeding rats, mice and pigeons to Charity and Virtue; Reno covering her young ones. The pictures brought the distant cast and crew closer.

At a time when people were stuck in their homes, birds in a nest showed togetherness begetting survival, Chastain said.

Even more ironic was the hawks’ choice of a nesting spot.

Of all the places for the birds to have built a home at the immense brick mills, they did so outside a studio nicknamed “The Nest.”

Voices of Hope’s emblem is a cardinal. Chastain has a cardinal tattoo below his wrist in memory of his mom, who in 2009 died of pancreatic cancer — and for whom Chastain founded the nonprofit.

In the last few weeks of her life, she and her son talked a lot about a pair of cardinals that had nested outside her home in rural Indiana.

Nature is as enchanting as it is unforgiving. Only 15% of red-tailed hawks survive their first year, says Marla Isaac, an educator and rehabilitator for the Massachusetts Raptor Center in Taunton.

Baby hawks, called eyas, are vulnerable to starvation, falls, and predation, including by hungry owls and raccoons, she said.

Females, which are about 25 percent bigger than males, mate with their partners for life. In the wild a red-tail lives 10 to 15 years. But Isaac, a master falconer, has a hawk named Moe that is 30 years old.

Red-tails rebounded from persecution by farmers in the early part of the 20th century and from pesticides such as DDT at mid-century, said Joan Walsh, head of ornithology for Mass Audubon.

Different varieties of red-tailed hawks live throughout the United States. They have adapted well to suburbia, are dedicated to their young, and are eminently watchable, soaring in grand circles or perching in trees or on light poles.

“They are fabulous birds,” said Walsh. “They are basically ubiquitous in Mass, wall to wall. They are part of the Mass story, one of our totem birds.”

Lawrence Conservation Commissioner Tennis Lily says the city offers rich opportunities for observing raptors and other birds in parks and on mill buildings, which can act like a natural setting for hawks.

“The brick sides are like cliffs and the street is a canyon,” he said.

A spectacle to observe

Parishioners at Holy Rosary Church, including Susan and Thomas Witham, were watching the hawks earlier this month.

The church parking lot is directly across the street from the section of mill where the hawks were nesting. The adults would perch on the church.

Chastain said he didn’t see the father hawk very often. The mother was a much more regular presence, hunting nearby.

About a month out of their eggs the chicks underwent a dramatic change in appearance. Within a week it looked like they had slipped helmets on their downy heads, changed into hawks with dark heads and penetrating gazes.

Irving Cruz, who works at Holy Rosary, and his dad, who lives across the street at St. Alfio’s Villa, watched the hawks for months. They became a regular topic of conversation between he and his father.

One day, Irving came out of work and saw a raccoon in a tree along Union Street looking up. One of the hawks in the nest looked down at the raccoon. They were locked in a stare down.

“Oh, this is going to be a fight,” Cruz thought. It’s unclear if it was one of the young hawks or the mother that was engaged in the staring contest. In any event, the instinctual mortal enemies averted combat.

Chastain said the mother hawk, Reno Sweeney, was fiercely protective of her young.

One day when he was in his studio, cleaning, and looked out the window to come face to face with Reno.

She lifted her yellow talons and threw them against the glass, scratching frantically at his face.

Chastain was glad for the barrier.

In early June, Charity and Virtue would perch at the edge of the nest, looking out on the city, opening and closing their wings.

In mid-June, one of the young hawks flew off. The other hawk followed suit a week or so later.

The hawks are likely perched elsewhere, their parents teaching them to hunt, Walsh said. The parents remain with their young until fall. Many red-tail hawks migrate in autumn, riding the airwaves south to places like Jamaica.

They return in late winter.

Chastain plans to build a wooden platform above the air conditioner in case the hawks come back next year to raise another family. 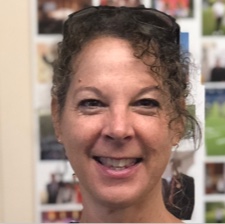 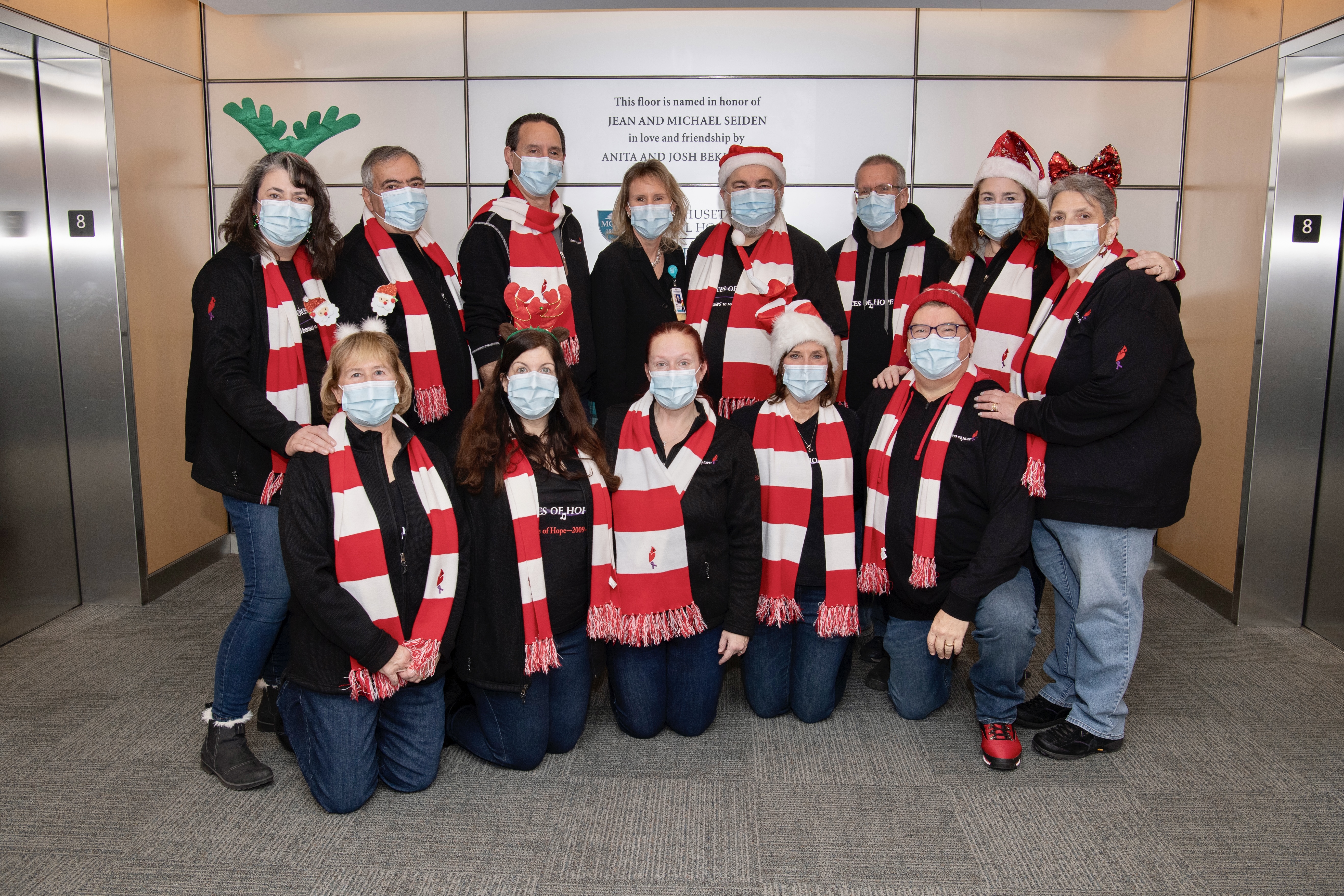 On December 21st  Voices of Hope Boston stopped by the Henri and Belinda Termeer Center for Targeted Therapies to share some holiday cheer with our patients, families and staff. Members of Voices of Hope volunteer year-round to raise awareness and funds for cancer research at Massachusetts General Hospital, and we’re so grateful for their continued support! It was a wonderful day of hope, healing and love. Please watch this short video of VOH at the MGH Cancer Center – Read more... 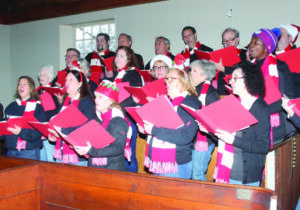 VOICES OF HOPE sang “Rudolph the Red-Nosed Reindeer” and other classic holiday tunes during Historic Lynnfield, Inc.’s Country Store at the Meeting House on Dec. 7. (Dan Tomasello Photo) By DAN TOMASELLO LYNNFIELD — The tradition continues. Hundreds of residents came together to kick off the holiday season in style when the Meeting House was transformed into Historic Lynnfield, Inc.’s Country Store on Dec. 3. A large number of residents stood in line waiting for the Country Store to open its doors at 9 a.m., Read more... 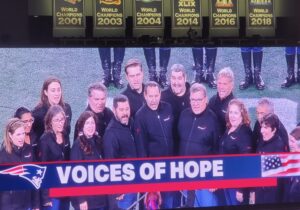 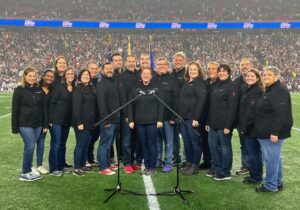 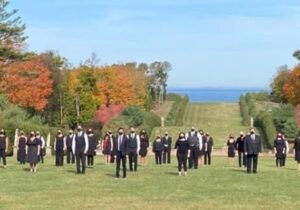 When you attend a Voices of Hope performance, the joy of theater will stem from a group of very special people, all of whom have been impacted by cancer in some way. Some members are cancer survivors themselves; some are care providers or partners to a loved one battling cancer; some are the parents, grandparents, friends or children of someone with a cancer diagnosis. All of these remarkable people come together not only to serve as a support system for each other, Read more...
View all news 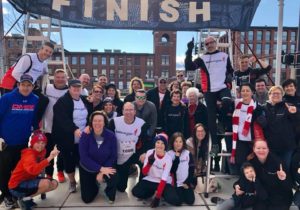 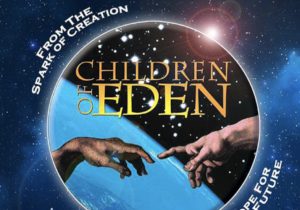